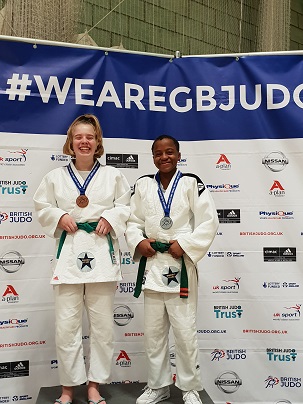 Moberly Stars at the English Pre-Cadet and Cadet Open

Well done to the Moberly Stars at the English Pre-Cadet and Cadet Open at Walsall today. Huge groups and a really high standard of judo on display. It was also an extremely long day..
Great results for Dinari and Anna in the Cadet section. After a first round loss Dinari won six contests to claim a superb bronze in the u55k. Anna also won bronze in the u57k after some fantastic contests. In the Pre-cadets, Dmori won gold in the +66k with a huge counter, while Myeisha won a well deserved silver in the u44k and Maddie won bronze in the u63k.
Ali was on the end of some dubious refereeing decisions, costing him a medal. While Oliver, Kyle, Kamal, ‘General’ Lee, Daniel and Corey were all left disappointed but no less motivated to come back stronger next time.