Weighing in at less than 92k, John fought in the u100k category. He was in typically combative form and after an opening round bye, his first contest was against MATTSSON from SWEDEN. John dominated the contest, which was decided in the first 30 seconds when John threw the Swede for Ippon.

John’s next contest was the semi final against KONCZ from ROMANIA. A very tough contest, with neither able to score during the 4 minute contest. With both on penalties, John was able to score a waz-ari in golden score to progress to his second European Junior  cup final in a little over a month.

The final was against the world number 9 ranked junior, DJORDA from SERBIA. In a very tactical contest, John was able to secure victory by a Yuko.  This victory (and the silver in Poland) has ensured that John will now move up into the top ten ranked juniors in the world, and remarkably, he has beaten 3 of the top 5 in recent weeks. John will be competing in the Junior World Championships in UAE in October for the US.

Gold was won by Lucy King in the u63k cadet section who put in an excellent performance to take top spot.

In the pre-cadet section, Dinari, Daniel, David and Michael Osher all had to battle extremely hard to win the bronzes in very hard categories.

Jamie King also picked up a bronze in the Junior mens u73k category.

Missing out on medals but gaining further experience in the cadet section Mohud, Michael Mensah, Bence and Tyrese were disappointed with their results but put in a great effort.

Moberly had two debutants in Myeisha Dawkins and Ciaron Edwards. Ciaron enjoyed his first tournament with two hard fought victories to claim gold.  Myeisha, competing in the lightest red belt category showed true fighting spirit and determination as she fought back to claim a well deserved bronze. Both showed great enthusiasm and are looking forward to their next events.

In the yellow belt section, Mariam was too much for her opponents winning five in a row to win her third gold of the year. Brother Dawood was also in good form producing a perfect harai-goshi on his way to the final were he was a little unfortunate to get caught for an ippon and claim the silver. Kyle moved up to the heavier u34k category and despite a semi final loss, was still able to produce a trade mark seio-nage to secure an excellent bronze medal.

In another tough encounter, John scored two yuko’s and seemed to be in a comfortable position. Unfortunately a lapse in concentration saw john caught for an ippon and had to settle for the silver medal. John was more than happy with this achievement.

There were some great results and performances  from the Moberly stars at the Kent International event last weekend.

On Saturday, the event was split into 3 sections. In the Yellow belt section all 6 competing players were in amazing form claiming 3 golds, 2 silvers and 1 bronze.

Ali, Kyle and Oliver all displayed remarkable consistency achieving another clean sweep in the u30k. Ali winning an excellent gold, beating Kyle in the final with Oliver battling to the bronze.

Anna and Amel claimed further golds in the u44k and u48k respectively, While Mariam had to fight hard to secure the silver in the u57k.

The Orange and Green belt section proved to be a very difficult event with the strong Dutch and Belgian teams in the mix.

Kamal showed great fighting spirit to progress to the final on the u30k. Omar was extremely unlucky in his semi final contest against his Belgian opponent and had to settle for a bronze. Kamal lost out to the same Belgian in the final but was chuffed with his silver medal. Michael was in tremendous form in the u60k. His speed and skill were too much for his opponents as he claimed yet another gold medal.

The final medal was won by Max in the Blue and Brown belt section in the u42k. Max was very impressive with his new technical skills but had to settle for a bronze on points.

Very tough event for the 11 Moberly stars at the 61 Judo Club Green Belt and Below event today. Kyle was in great form and won his first gold of the year with a truly battling performance in the u30s group A. This included an immense contest with club mate Liam in the semi final. Liam ended the day with a well deserved bronze medal. D’mori showed his amazing fighting spirit with a silver medal in the u46, while Mariam claimed another silver in the u52k.
In the Orange and Green section, Kamal fought at the heavier u34 category and was very impressive. He was unlucky not to win the group but claimed an excellent bronze. Luan was equally impressive and won a fantastic bronze in the u38k, displaying his unique fighting style. Brothers David and Michael won bronzes in the u42 and u46 groups respectively, after hard fought battles.
Dinari, Daniel and Nelson fought well but just missed the medals 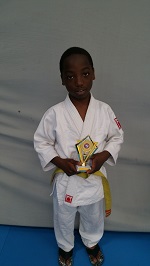 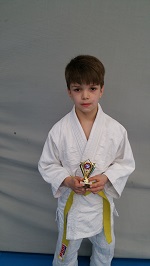 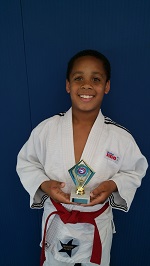 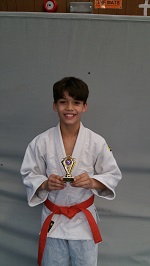 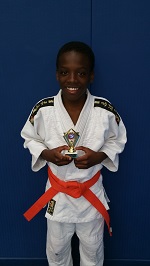 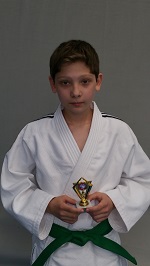 13 Moberly Stars took part in the Crayford and Metro event on Saturday and returned with a great haul of 12 medals.

4 Golds, 4 Silvers and 4 Bronzes were just rewards for the hard work in the dojo!

In the red belt section, D’mori battled hard in his 3 contests to win the gold in his category. While Gabriel produced a superb o-goshi in his first contest on his way to a bronze medal. Making her debut, Gyovanna won her first contest in her group to secure a first bronze medal. 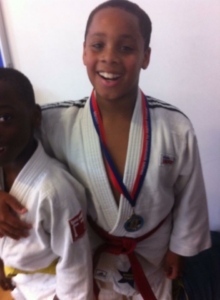 The next group up were the 8 to 11yrs yellow and orange belts. Kamal, Kyle and Liam dominated the u30k category with another combined display of attacking judo. Kamal pipped Liam to the gold by virtue of the greater points tally, while Kyle claimed the bronze. 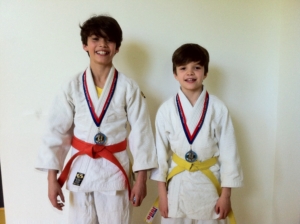 In the u38k group, Daniel was surprised by a defeat in his first contest, but quickly returned to winning ways to secure a gold. Nelson started with an excellent victory and continued into the later rounds but just missed out on the medals. Luan made very short work of the u42k category winning in fine style.

The final group were the 12 to 15yr yellow and orange belts. Anna made it a second win at Crawford following last years victory wth a gold in the u44k. Amel won the silver in the u48k beating teammate Mariam, who had to settle for the bronze. The final medal was claimed by Mohud in the u60k winning a well deserved silver.

A massive well done to Bishops Stortford Judokwai for a truly excellent event today. The Bishop Stortford team event for teams of 3 players in combined weight categories (105k and 170k) provided plenty of excitement and drama, with excellent judo in a family friendly environment.

Two Moberly Stars teams took part in the boys lightweight (105k) category.
Kamal, Daniel and Max made up the A team, while Liam, Dinari and Luan​, the B team. Kyle and Nelson were reserves.

The A Team started with a 2-1 victory over the Bishop Stortford B team. Unfortunately, Kamal was injured in the next contest against Core Elite and had to withdraw while leading, however Daniel​ and Max​ ensured a 2-1 win. With Kamal injured, brother Kyle was brought into the A team and a 3-0 victory over the Bishop Stortford C team, followed by a 2-1 win over Pinewood A, set up a semi final with the Ealing Tiny Mighties. A hard fought contest saw the A team progress to the final with a 2-1 victory. Unfortunately, Max had to withdraw from the team and Nelson was promoted to the A team for the final.
After 3 gruelling contests the A team had to settle for silver. 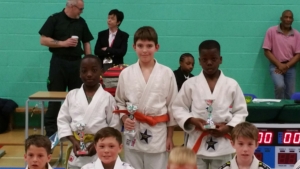 The B Team found this event to be a very tough one and went down 2-1 to the Pinewood B and Ealing Tiny Mighties. Dinari was injured in the 2nd contest and the team had to compete without a 3rd player as both reserves were now ineligible. The B team were defeated by the Bishops Stortford A team, but ended with a 2-1 victory over the Core Stars.

It was an excellent performance by all. Onwards and upwards.

4 Moberly Stars made the trip to Bishops Stortford Judokwai​ today to compete in the red and yellow belt championships. A very well run event saw Liam win an amazing gold medal with his excellent seoinage techniques. Kyle won a great silver medal after a nervous start, while Alfie battled hard to claim a bronze. Gabriel Ladbury made a great debut and earned a fantastic silver medal. Well done to all. Onwards and upwards

John Jayne had a bye in the first round and lost in the second round to Luciano Corrêa from Brasil. Luciano is the 2007 World Champion, represented Brasil in the 2008 and 2012 Olympics, and he got Bronze in the World Championships in 2005 and Gold in the Pan American Games in 2011 and Silver in 2014. He won Gold in Dusseldorf last year and on Sunday went on to beat the 2013 World Champion, Elkhan Mammadov, from Azerbaijan, in the next round. There were 41 entries at -100 kg.

John led the match a wizari to nil with two minutes remaining, but was then thrown for a yuko and held down for ippon. John had one penalty and Luciano had two penalties.

This site uses cookies. By continuing to browse the site, you are agreeing to our use of cookies.

We may request cookies to be set on your device. We use cookies to let us know when you visit our websites, how you interact with us, to enrich your user experience, and to customize your relationship with our website.

Click on the different category headings to find out more. You can also change some of your preferences. Note that blocking some types of cookies may impact your experience on our websites and the services we are able to offer.

These cookies are strictly necessary to provide you with services available through our website and to use some of its features.

Because these cookies are strictly necessary to deliver the website, refuseing them will have impact how our site functions. You always can block or delete cookies by changing your browser settings and force blocking all cookies on this website. But this will always prompt you to accept/refuse cookies when revisiting our site.

We fully respect if you want to refuse cookies but to avoid asking you again and again kindly allow us to store a cookie for that. You are free to opt out any time or opt in for other cookies to get a better experience. If you refuse cookies we will remove all set cookies in our domain.

We provide you with a list of stored cookies on your computer in our domain so you can check what we stored. Due to security reasons we are not able to show or modify cookies from other domains. You can check these in your browser security settings.

We also use different external services like Google Webfonts, Google Maps, and external Video providers. Since these providers may collect personal data like your IP address we allow you to block them here. Please be aware that this might heavily reduce the functionality and appearance of our site. Changes will take effect once you reload the page.