"Medals are won in the club. They are picked up at the event." 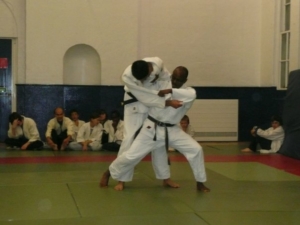 Sensei Basil is a fully qualified British Judo Association (Level 3) coach. He is a 3rd Dan and an ex-British Youth Champion. Sensei Basil has developed into a father figure and a mentor to many Moberly Stars children and young adults while having a young family of his own.

Sensei Basil received the BBC London Unsung Sporting Hero award in 2005 for his efforts in bringing judo to the local community and having such a positive impact on the young people he engaged with.

Sensei Basil was among the recipients at the 2007 Annual Torch Trophy Trust Awards at The Queen’s Club in London. Torch Trophy Awards are presented by the Trust to individuals who have been identified as making an outstanding contribution as a volunteer in their chosen sport. Sensei Basil was nominated by Scott McCarthy, the CEO of the British Judo Association, in recognition of his outstanding work with the youngsters of Moberly Judo Club. The award was presented by HRH the Duke of Kent.

In 2013 Sensei Basil was also awarded the Active Westminster Community Coach/Instructor of the year, presented by ex-paralympian Ade Adepitan.

In 2018 Sensei Basil was awarded the British Judo Association Talent Coach of the Year, presented by ex Olympian Rowena Birch.